Palazzo Seneca "At home in Umb.. 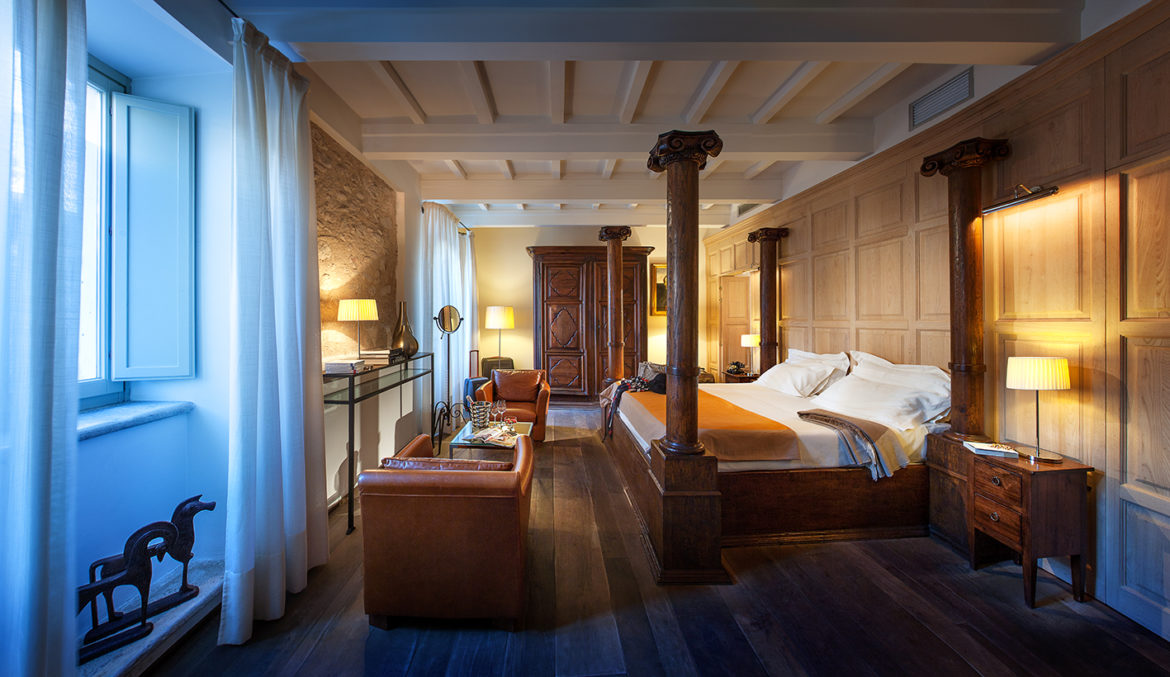 "At home in Umbrian palace"

At home in Umbrian palace

This is not our slogan, but a way of thinking, planning, hosting, living this elegant sixteenth century residence. We have put together history, design, simplicity, genuineness and creativity to bring you into a new Umbrian tradition.

In the historic center of Norcia, few meters away from the main square, there is one of the most prestigious and exclusive buildings of Umbria: 24 charming and refined rooms, equipped with wi-fi, wellness center with jacuzzi, aromatherapy and massages and the gourmet restaurant Vespasia, a unique environment which combines taste, tradition and innovation.

At home in an Umbrian palace: this is the atmosphere you will find in this charming 16th century charming residence which opens its doors in Norcia, at the heart of Umbria. Fusion between design and innovation, simplicity and quality, are the secret of this new elegant project promoted and realized by Vincenzo and Federico Bianconi, the latest generation of a family that has been offering Hospitality and Catering in Italy since 1850. The skilled restoration, the research of unique materials and objects along with the work of the best Umbrian craftsmen, make of Palazzo Seneca a unique destination. Please don’t consider us a simple hotel.

Palazzo Seneca was built in the 16th century by the homonymous family from Piedivalle, a town near Preci, whose inhabitants were famous as skilled wood carvers. Among their works is the wooden choir of the Basilica of St. Benedict, which no longer exists in the church, and the choir in the Abbey of St. Eutizio. Inside is a large stone fireplace dating back to the 16th century, topped by the family crest which depicts a bar in the middle of which rests a compass and, under it, three roses. Compass and bar are a symbol of the guilds the family belonged to. Palazzo Seneca was the first hotel in Norcia and among the first in Umbria as it opened in the early 1900s. The residence has undergone several changes over time, but it still maintains intact, on the ground floor, the features of the vaulted rooms typical of the 16th century. The structure underwent a major restoration following the earthquake of 1997 that ended with the reopening in June 2008, when the hotel went back to being one of the most beautiful monuments of Norcia. Palazzo Seneca is considered a very safe building from a seismic point of view. It has passed all the tests carried out by technicians from the Civil Protection Agency and by a highly skilled team of engineers and technical experts following the earthquake that has hit all of central Italy since August 24th. The Relais & Châteaux Palazzo Seneca was declared “fully habitable” as indicated in the AeDES technical sheets that you can download from our website.

The 24 elegant and refined rooms, all different, with four-poster and wrought-iron beds or wooden carved headboards, the leather desks and armchairs, the design bathrooms with prestigious marbles, the linen bed sheets all comply with the luxury standards of the most prestigious residences and will contribute to let you live a unique experience

The “Vespasia” project was created and is operated by Vincenzo and Federico Bianconi, the latest generation of a family of enthusiast restaurateurs, with a tradition that began in the 1850s and continued without interruption. They love the good and healthy things, their land and the environmental and social sustainability.

In the dungeons of the Relais & Châteaux Palazzo Seneca, few meters away from the main square of Norcia, a mystical silence surrounds the rooms dedicated to the wellness centre. Vaulted and cross-shaped ceilings and ancient stone floors are the perfect backdrop for your quietness.

How to get there

Route (Google Maps) to get to Relais&Chateaux Palazo Seneca

By train to Spoleto (about 45km). From Spoleto, Roma Tiburtina, Foligno and Perugia daily trips by public bus